The Crisis in Ukraine has brought three women together with two common bonds, compassion for Ukraine and a passion for art. Irina Bondarenko, Irene Mokra and myself have been working together to organize an art sale to benefit individuals injured during the protests in Kyiv. It will be held Saturday, April 26, 2014 at 4844 Jackson Road, in Ann Arbor, Michigan.

Our goal may be the same but our connections to Ukraine are different. My father emigrated from Western Ukraine when he was 19. I have visited there 3 times. The first during Soviet times. Irina Bondarenko is from Kyiv. Her father was protesting in Maidan during the winter. Irene Mokra is from Lviv and also has family who remain in Ukraine.

In February the relatively peaceful demonstrations ended when police began to clash with the protestors. Police began to fire guns with both rubber bullets and then live ammunition. The death toll is estimated to over be 100 (the Heavenly Hundred), with thousands injured, and almost two hundred missing.

Irina could sit still no longer. She sent out plea for help. The email read: “Many of you have heard about dramatic events that have shaken Ukraine. A new hope for democratic development has been born as a result of a three-month standoff on Maidan in Kyiv. Many Ukrainian artists came to the square to be with the people, to play music, to paint and photograph, to give to the movement a voice that does not need translation. They feel that the artist cannot stand aside in this struggle. We too would like to help that cause, and support the people who had enough courage to come to Maidan, risking their safety and the welfare of their families. After the tragic events of February 18-20 we also want to support the families of those who were brutally killed by armed forces. We decided to organize a charity art sale to provide a humanitarian aid to the people who revolted against tyranny”. Irene and I were the first to answer her call.

I didn’t hesitate to think. My Ukrainian heritage has been part of who I am since I was a child. I remember a day in elementary school in the 1960’s. We were celebrating diversity (they didn’t call it that back then). When it was my turn to share my ethnic background, the other children laughed and teased “you made that up.” I went home and asked my dad; “Are you sure we aren’t Polish, German, Irish, or Mexican, like my other friends. ” My father said; “No, you are Ukrainian. Never be ashamed of who you are.”

Acknowledging these ethnic ties does not mean diminishing others who are different. I grew up in an ethnically diverse neighborhood in Southwest Detroit. I didn’t have any Ukrainian friends. I learned to be proud of who I am, yet appreciate my multicultural environment. 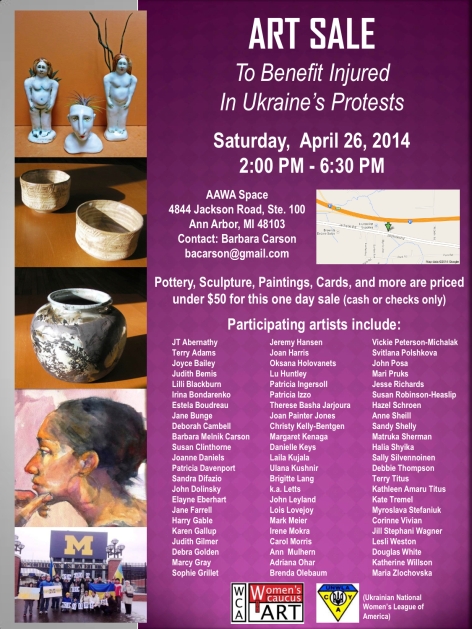 Irina has a gift for making Pottery and takes classes at the Pottery Guild.

I am a Narrative Sculptor using clay and reclaimed objects to convey a story or a mood. Currently I am focused on exhibited and selling work in Michigan; River’s Edge Gallery in Wyandotte, Dancing Dog Gallery in Ann Arbor, Black Door Galley in Tecumseh, and the Riverside Arts Center Gallery Gift shop all sell my work.

Irene is skilled at painting and drawing. She attends a figure drawing class in the AAWA space on Jackson Road.

Today I am proud to be a part of a generous community of artists who have all joined us by donating their art for our sale to benefit those injured in the wintery protests on Maidan in Ukraine. We have over 70 artists who have agreed to have their work sold for $50 or less, to help this cause.

Please join us on Saturday, April 26, 2-6:30 at 4844 Jackson road in Ann Arbor, MI. Our sale is being sponsored by UNWLA (Ukrainian National Women’s League of America) and WCA-MI (Women’s Caucus For Art).

I'm a narrative sculptor navigating her way through the ever-changing currents in what feels like an art ocean. Whether appreciating the calm rhythm of calls for art and exhibiting, or waiting to catch a big wave of inspiration to take me to the top. I just love being in the water. Formerly a pickle packer, theater major, crisis counselor and occupational therapist with a BA in Communications and a BS in Occupational Therapy, only to discover I've always been an artist. My work grows from a strong connection to people and a passion for discovering the beauty in ordinary things. I sculpt figuratively in clay, utilizing the female form and women’s themes. Frequently my inspiration is drawn from childhood memories and my own short poems. Like each of us as humans every work is uniquely influenced by the past and present and has a narrative.
View all posts by Babs →
This entry was posted in art, gratitude, Inspiration, Michigan Art, Ukrainian. Bookmark the permalink.